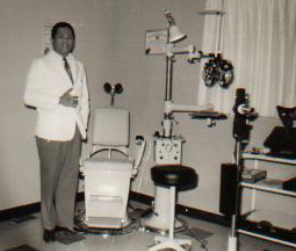 Serving New Mexico for over 50 years!

In 1959, Dr. Tony Q. Chan and his wife, Carolyn, came to Albuquerque, NM with the goal of building a practice based on excellence and community involvement. Dr. Tony Chan was very involved in the Albuquerque community, serving on multiple local organizations such as the Lions Club and President of the New Mexico Optometric Association, as well as many federal organizations, such as Trustee for the American Optometric Association and the National Eye Advisory Council of the National Eye Institute. Dr. Tony Chan's brother, Dr. T. Roy Chan, also had a private optometric practice in Santa Fe for over 40 years and there are three other cousins and a great-uncle in the family who have all been optometrists.

Dr. Tony Chan was recently recognized with the Spirit of America Award from the Chinese American Citizens Alliance.  He was featured in a recent Albuquerque Journal news article that can be seen at https://www.abqjournal.com/1080699/states-first-asian-american-optometrist-wife-honored-for-achievements.html.

Dr, Tony Chan has been recognized with countless awards during his lifetime, including the Lifetime Achievement Award by the New Mexico Optometric Association, the Lifetime Achievement Award by the Illionois College of Optometry, and will be inducted into the Optometry Hall of Fame by the American Optometric Association Foundation at their next annual meeting.

Dr. Tony Chan's daughter, Dr. Mamie Chan, grew up in her father's practice. As a child, she would play in the back office and as she got older, she would work every summer at the front desk. During her undergraduate years, she worked as a technician and optician; later, she took over the bookkeeping and accounting aspect of the practice. Eventually, Dr. Mamie Chan followed in her father's footsteps and attended her father's alumni college, Illinois College of Optometry. ABQ Eye Care continues the tradition of Dr. Tony Chan's standards that are based upon values, commitment to the community, and dedication to the patients' health.

Get Social With Us

Recommend this page on: